Audacious has commissioned artist Gijs van Bon to create KRYT, a light writer that writes poems on a wall while the audience listens to them being read. The text of the poems created by young people of Southampton will be written word by word on a projection screen with a clear blue laser before fading away, leaving space for new words. In partnership with Artfulscribe we have developed a poetry project with online and face to face workshops to support primary schools to create these poems. 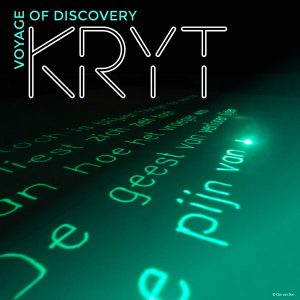 When the Pilgrim Fathers sailed on the Mayflower from Southampton 400 years ago seeking a fresh start in life, the passengers were taking a great leap into the unknown as they journeyed towards what for them was a brave new world that we now know as America. We can only imagine what those people were thinking on that long voyage. Who were they going to meet, and what might life be like as they ventured into the unknown?

As we grow up, our charts are marked by transition points like starting school, moving between primary and secondary levels of education and making connections with new groups of friends. Using parallels such as these, ArtfulScribe will work with Key Stage 2 pupils to create poems for a collaborative project with Dutch artist, Gijs van Bon. The children will embark on their own Voyage of Discovery as they explore issues including identity, belonging, and journeys, in fun-packed classroom activities led by Susmita Bhattacharya, an award-winning local writer of short stories, poetry and prose.

Selected poems will be presented in Southampton by KRYT, an art installation using laser technology, by Gijs van Bon – planned for February 2021.

Please find digital resource videos below that form as part of a digital resource pack of online sessions, available for free distribution to schools and community groups who would also like to take part.

Please get in touch for more details info@audacious.org.uk

Close Menu
We use cookies to ensure that we give you the best experience on our website. If you continue to use this site we will assume that you are happy with it.Ok